In our Secure Computing (SC) group, we conduct research to process data with preserving privacy and secret information in the data. We focus on two technologies that are secure computation and differential privacy.

We implemented a national project which is to improve performance (1,000x) of homomorphic encryption from aspects of both computer architecture and theory from 2015 to 2021. We collaborated with other research institutes and archived 2,912 times improvement (26 times by theory and 112 times by middle ware). We also released 13 practical open source libraries.

In the big data era, cloud-based machine learning as a service (MLaaS) has attracted considerable attention. However, when handling sensitive data, such as financial and medical data, a privacy issue emerges, because the cloud server can access clients’ raw data. Therefore, there is a need for both privacy protection of such sensitive data and utilization of the data (e.g. application of machine learning). In this research, we focus on performing the inference process of convolutional neural network (CNN) securely using homomorphic encryption which allow computation over encrypted data without decryption. 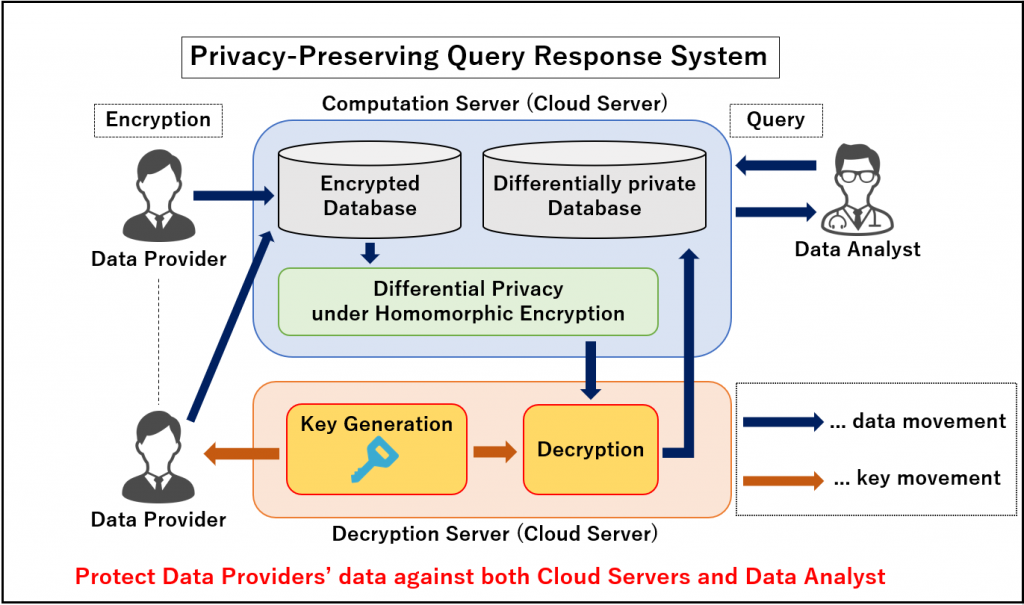 In this research, we are working on constructing the privacy-preserving query response system combining homomorphic encryption and differential privacy. Our proposed system protects data owned by Data Providers against both Cloud Servers and Data Analyst by applying differential privacy over ciphertext data using homomorphic operations. In addition, by decrypting differentially private ciphertext data and constructing Differentially Private Database represented in plaintext in advance, our proposed system speeds up the response time to Data Analyst’s queries. 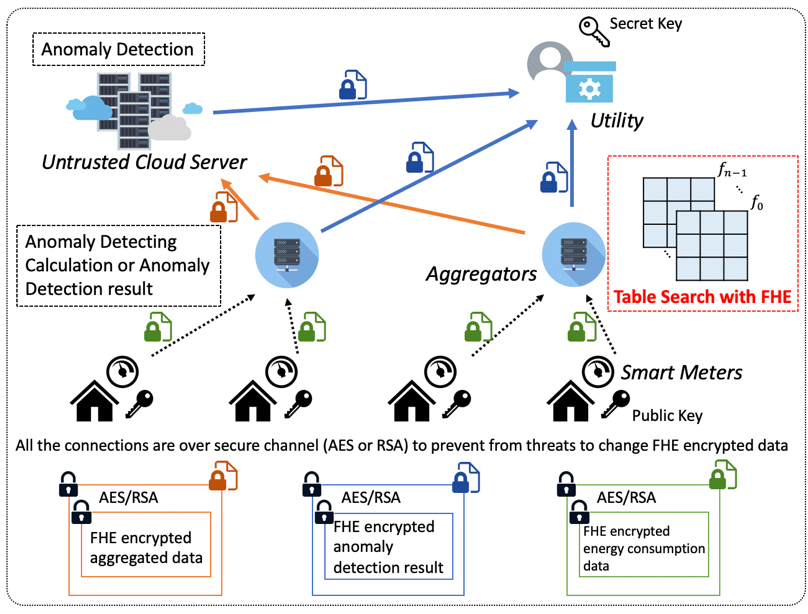 Smart grid is one of application in smart connected communities (SCC). In order to construct privacy-preserving anomaly detection system on smart grid, we adopt fully homomorphic encryption (FHE) to protect users’ sensitive data. FHE is an encryption scheme that allows a third party to evaluate arbitrary functions using modular arithmetic over encrypted data without decryption. To evaluate any function with FHE, we implemented a protocol replace the calculation to table lookup with FHE. Store the computed function lookup table in cloud server, by searching the input value and select the output value from lookup table with homomorphic encryption, we can decrease the computation cost and run time. 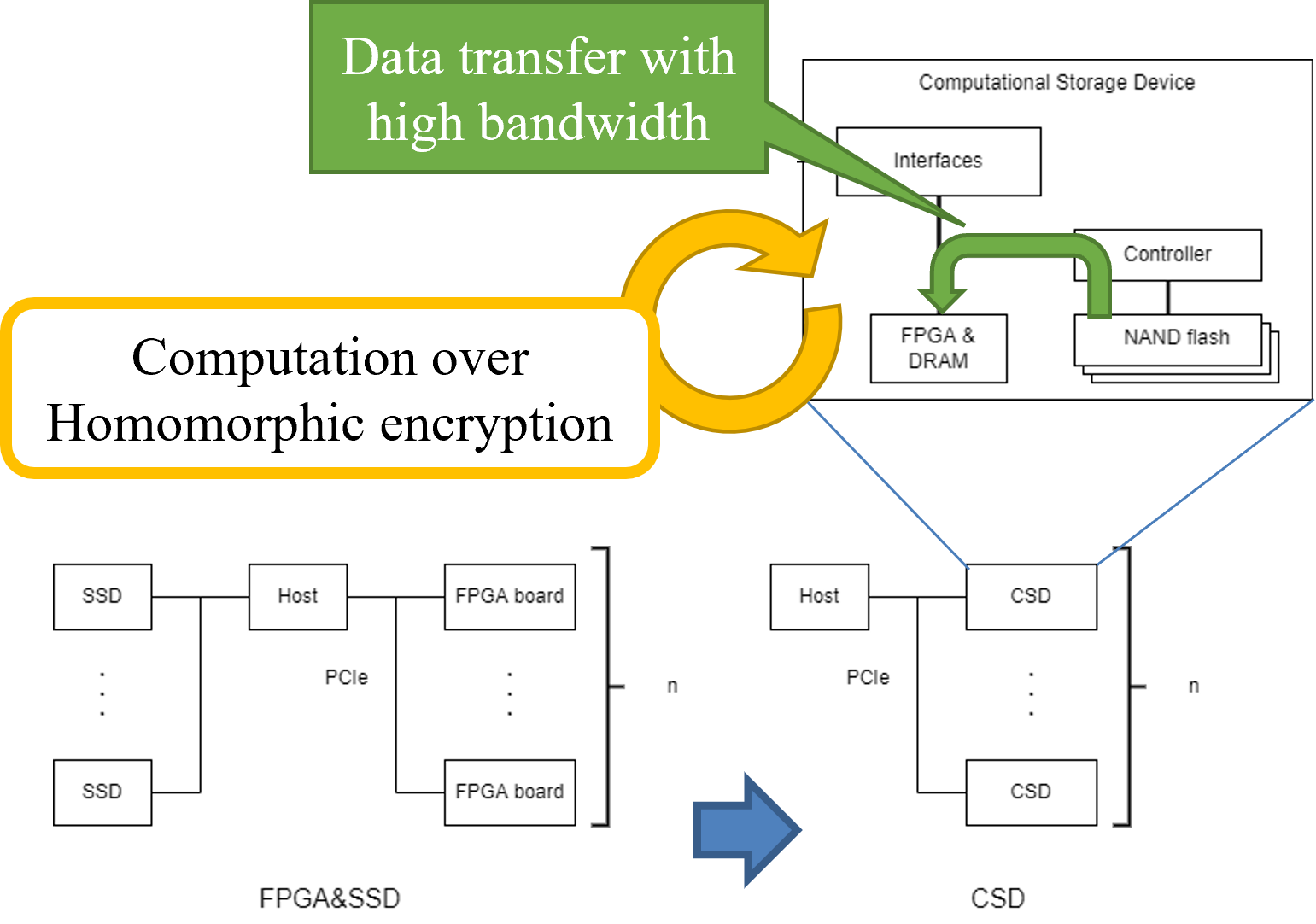 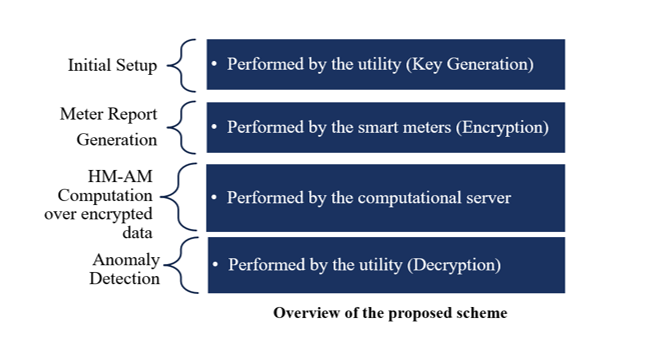 Homomorphic Encryption (HE) is a form of encryption that permits users to perform computations on the encrypted data without having to decrypt the data. However, the downside of HE is computational overhead in terms of execution time. Therefore, a method for privacy-preserving and attack detection of data generated by smart meters to shorten the execution time is necessary. Elliptic curve cryptography (ECC) based HE for anomaly-based attack detection for data falsification over encrypted data provides faster computation and ensures data security. Through ECC, we can achieve the same security as a 3,072-bit RSA key with a 256-bit ECC key and HE allows to perform computations on encrypted data. Therefore, ECC based HE requires less memory space to implement the encryption and decryption algorithms, which in turn reduces the time required to perform encryption and decryption operations. 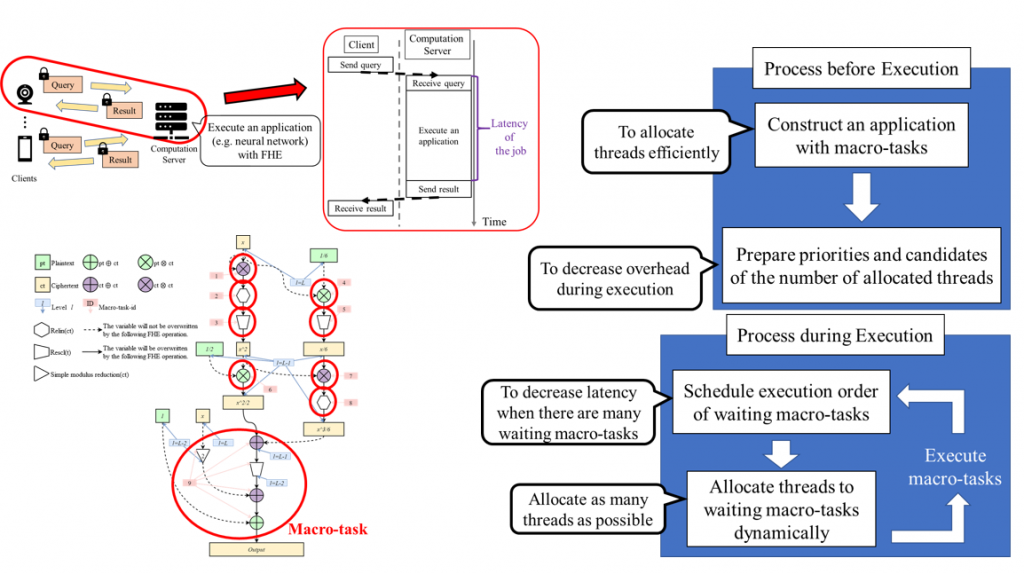 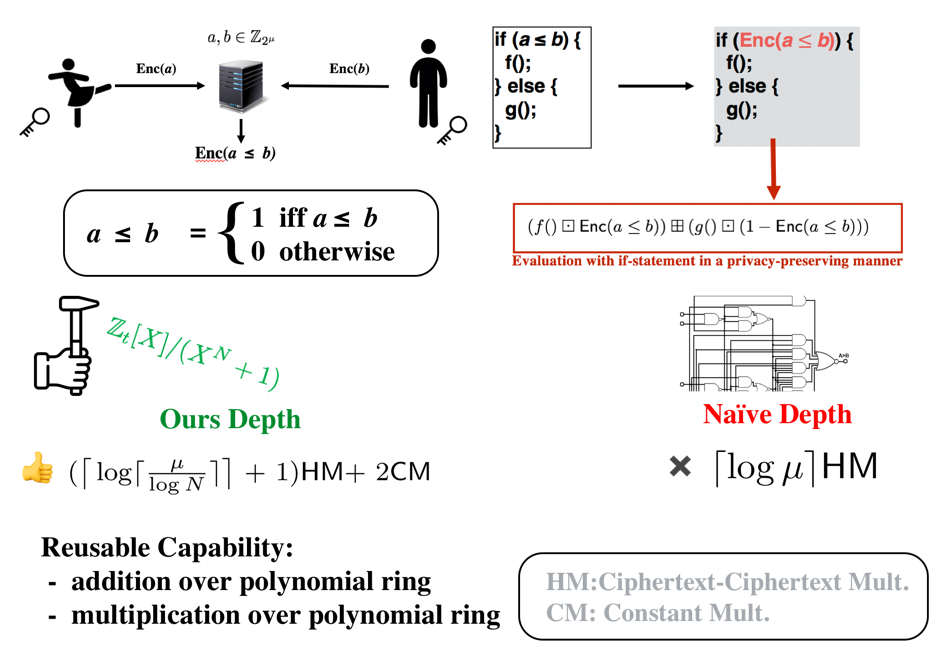 Comparing two homomorphically encrypted integers and its subsequent computation typically require bitwise encryption as it supports arbitrary computation. However, bitwise evaluations for arithmetic circuits such as addition and multiplication over integer are expensive. In this study, we proposed a construction without using bitwise encryption scheme, that is compatible with addition and multiplication of polynomial ring over the encrypted comparison result. We also showed that the depth required for our comparison circuit is the lowest among the previous methods.

Optimization of bootstrapping placement on the compute circuit Leveled homomorphic encryption, which is a type of fully homomorphic encryption, requires a time-consuming process called bootstrapping each time a certain number of operations between ciphertexts are performed. Here, when the operation you want to calculate in advance is expressed in the form of a circuit, you can reduce the number of times bootstrapping is required for the entire calculation by properly selecting when to execute bootstrapping on the circuit. You need to find the right placement within multiple constraints. 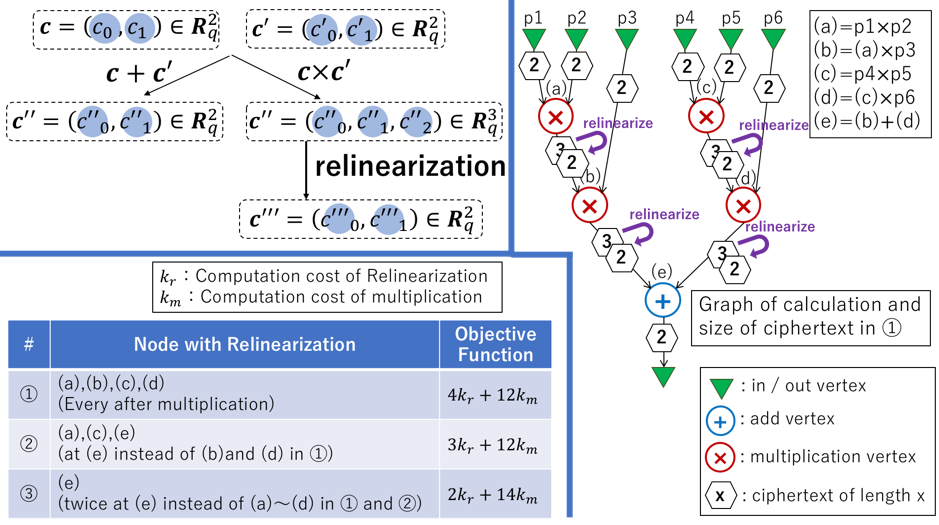 Ring-LWE-based FHE schemes have a problematic feature: ciphertext size increases with every homomorphic multiplication. Furthermore, the computation cost of homomorphic multiplication linearly increases with increasing input sizes. To overcome this, these FHE schemes support a special operation called relinearization, which can reduce the ciphertext size. Relinearization requires almost the same amount of computation cost as that of the homomorphic multiplication, which takes a few to hundreds of milliseconds. Thus, determining when and the number of times to relinearize a ciphertext in a given arithmetic circuit to evaluate in order to minimize the total computation cost is an important task. This problem has been proved to be an NP-hard problem and is called the relinearize problem. In this study, we design an approximation algorithm to address the relinearize problem. The algorithm runs in polynomial time, and we experimentally confirmed that the output of the algorithm is nearly the same as the optimal solution. We also show that the output is exactly equal to the optimal one in a specific case. 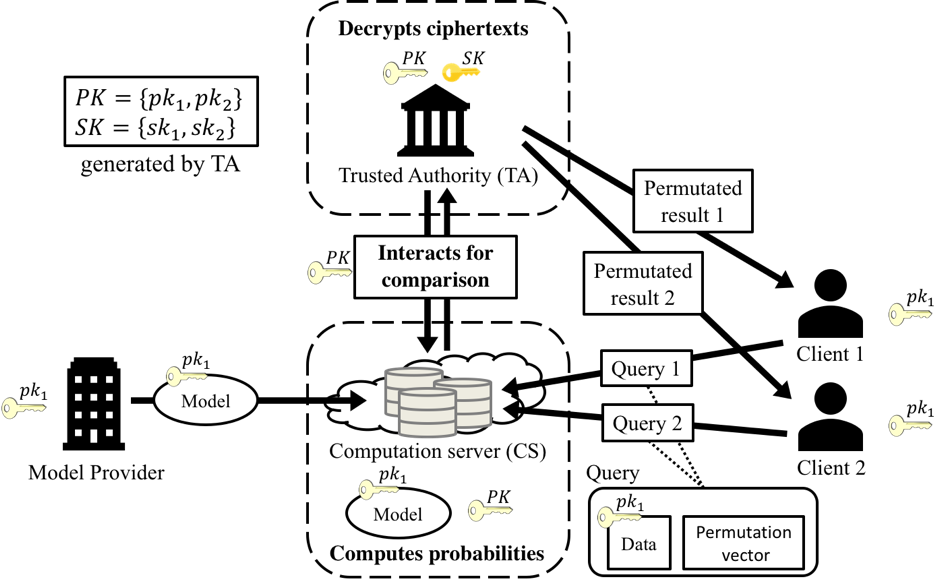 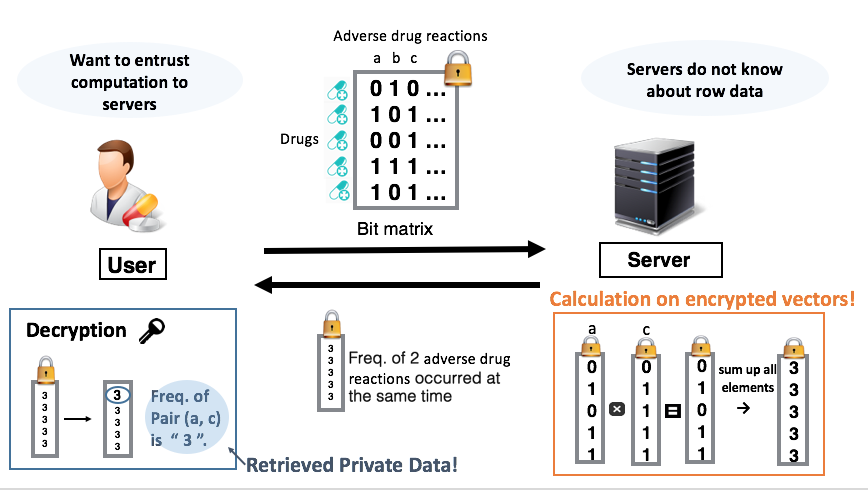 A study that calculates frequently occurring items from a certain item list while keeping them encrypted.
For example, when a pharmaceutical company wants to investigate drugs with frequent side effects from a large number of drug groups, it wants to outsource the calculation, but because the frequency of side effects for each drug is a company secret, it wants to avoid information leakage. The point is how to build a protocol while maintaining the consistency of the decryption result within various restrictions. 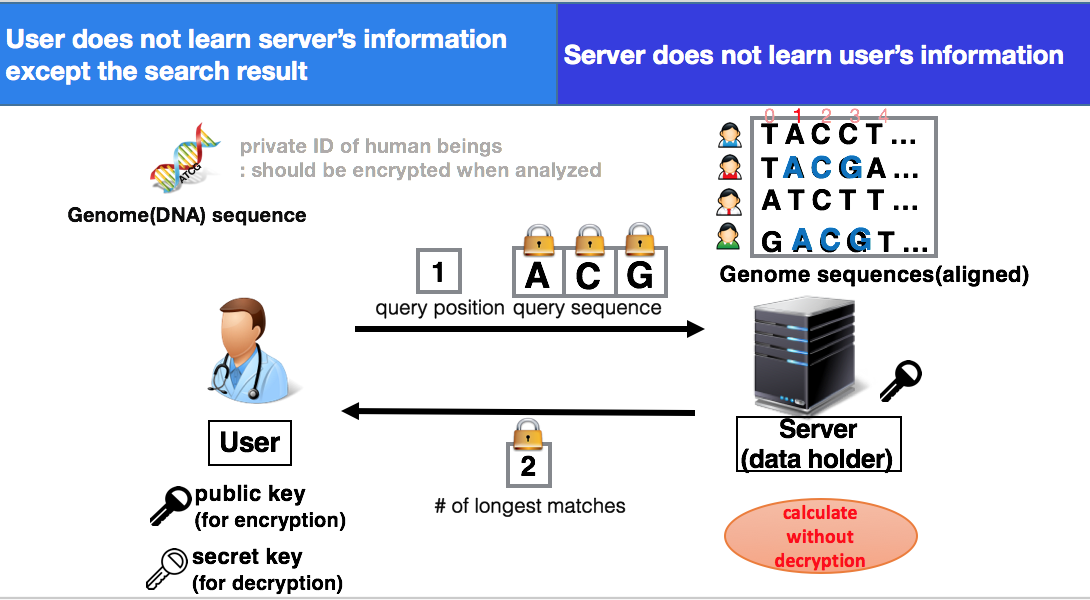 This is a study to find the number of elements of the intersection of personal data sets owned by two different institutions while being encrypted on the cloud. For example, researchers can use databases owned by hospitals and airlines to combine databases needed to identify areas infected with a disease. In the process of this processing, a protocol that can perform calculation processing while hiding the data information in the database from the cloud is constructed. 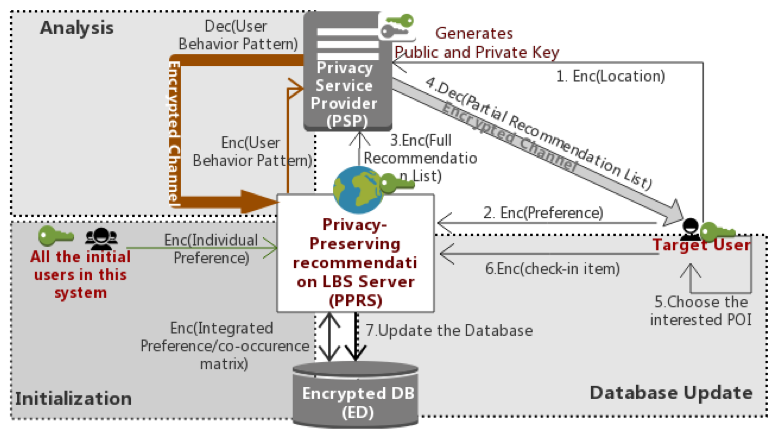 Extracting useful information by big data analytics such as artificial intelligence technology is receiving a lot of attention from the world. The world is not fully aware of the importance of security, except for banks and hospitals which need high-security assurance levels. Currently, the location-based services such as google map and tabelog hold huge amount of users’ private information. If such huge amount of data are stored and analyzed without encryption, it could lead to critical social problems in the near future. Therefore, this research is about a new mechanism that enables service providers to provide high-quality recommendations without knowing users’ location information and search contents. When a large number of threads are executed simultaneously on a multi-core system (eg fully homomorphic encryption processing), memory allocation may become a bottleneck in processing time and reduce scalability. This is because system calls are called at the same time in multithreading and lock contention occurs. Therefore, the number of lock conflicts is reduced and the speed is increased. Specifically, the policy is to reduce the frequency of system calls and manage memory in the user area as much as possible.